C.S.CARGO Group purchased trucks at a cost of CZK 155 million in 2018. The company acquired 51 Mercedes-Benz, Volvo, MAN and Renault vehicles and 48 trailers. A completely new aspect was the purchase of six custom-manufactured trailers for transporting specific handling equipment.

Most of the more than fifty tractors were MAN vehicles, while the majority of trailers were, as in previous years, from the manufacturer Krone. The new vehicles were added to the Czech and, partially, Polish fleets.

An absolutely new aspect of the vehicle-fleet upgrade was the purchase of six custom-manufactured Pavelli trailers acquired for the Czech subsidiary of Linde Material Handling. The trailers serve for transport of forklifts and logistics equipment that cannot be transported in standard trailers.

“The annual investment of hundreds of millions of korunas in the modernisation of the fleet gives our drivers greater safety and comfort while also reducing operating costs. A major challenge for us was the purchase of six custom-manufactured trailers for transporting specific handling equipment. That is something completely new in our fleet and such unique trailers are not commonly seen in Europe. We welcome such projects, as they not only enrich us professionally, but also motivate our employees,” says Aleš Willert, general manager of C.S.CARGO Group.

C.S.CARGO Group possesses an expansive fleet of modern and regularly serviced vehicles. In the past eight years, the company has purchased vehicles in the value of nearly CZK 2 billion. When purchasing new freight vehicles, emphasis is also placed on ensuring that the strict European EURO 6 standard is fulfilled. The company supports eco-friendliness not only because of European regulations, but also in line with its own principles. In February, for example, C.S.CARGO brought to the Czech Republic the first mobile high-capacity battery, which in certain cases serves as a replacement for standard energy sources such as diesel generators. 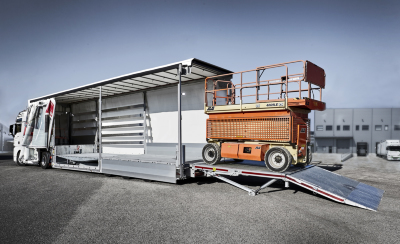