C.S.CARGO forges ahead with fleet upgrade, with another investment of close to CZK 200 million in new vehicles last year

In 2017, C.S.CARGO procured trucks in the value of over CZK 187 million: 69 Mercedes-Benz, MAN, Scania, Volvo and DAF towing vehicles and 72 Krone, Wecon and Lamberet trailer vehicles. C.S.CARGO upgrades its fleet in a similar scope every year.

Every year, C.S.CARGO invests in new additions to its fleet. Last year, the company invested more than CZK 187 million in the fleet upgrade. All new vehicles meet the strictest Euro 6 emission standard and are equipped to a modern standard, which significantly contributes to cost savings and road safety improvement. Among towing trucks, Mercedes-Benz accounts for most of the new acquisitions, while Krone, as was the case in 2016, dominated among trailers. C.S.CARGO upgrades its fleet of trucks every year in all group companies – in the Czech Republic, as well as in Poland and Slovakia.

“As every year, also last year we invested a substantial amount of money, which we had earmarked for that purpose, in new vehicles. We procured vehicles to operate on international and domestic transport routes, coupled combinations and frigo trailers for perishable food transportation, but also specialized vehicles for electronic cargo. All vehicles meet the strictest Euro 6 emission standard,” explains Aleš Willert, Chief Executive Officer and Chairman of the Board of Directors C.S.CARGO. “The biggest news of 2017 for us was the acquisition of Volvo trucks in the under 12t class for tanker trailers which are used to transport tank beer. These trucks make day-to-day deliveries of tank beer to Czech pubs in city centres,” adds Willert.

C.S.CARGO Group has a large fleet of modern and regularly serviced vehicles. Most trucks meet strict Euro 5 EEV and Euro 6 emission standards. The company sells its used vehicles as part of its regular fleet upgrades; for this purpose, the company created a special website www.cscargotrucks.com, where  potential buyers will find all relevant information. 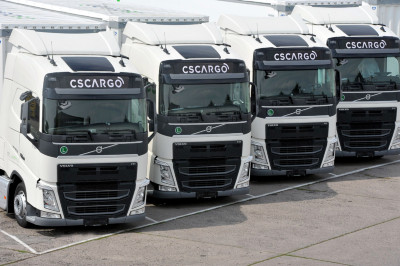