C.S.CARGO is well aware of its social responsibility and the importance of including charitable and sponsorship activities in its mission. Since the company's founding in 1995, it has cooperated on and taken part in a series of projects, both local and national.

Since its founding, C.S.CARGO has taken part in a number of charitable activities. Our philosophy of social responsibility is connected to the overall group's strategy and is an integral part of the company's mission and vision.

C.S.CARGO is the proud general partner of HBC Jičín. We have cooperated with the Jičín handball club for a number of years and our employees have become fans of the team, making it a point to attend all the club's important games.

Handball has a long tradition in Jičín and the surrounding area, and has gained a good deal of respect in recent years. The first mention of handball in Jičín dates back to 1941 and the club was officially founded in 1942.

The club had an extraordinary 2013, when the it soundly defeated TJ Cement Hranice in front of a ravenous sell-out crowd to take the national championship, the first in its history. And C.S.CARGO helped make it happen!

C.S.CARGO became a partner of the Krkonošák bike marathon in Lomnice nad Popelkou, a race that grows in size every year. Participants can choose the length of the course on their own, biking either 86, 51, or 28 kilometers. As our company is full of amateur athletes, many of our employees have taken part under the auspices of the newly-created C.S.CARGO team.

C.S.CARGO began supporting the traditional triathlon held in Karlovy Vary in 2010, which is now called the CITY TRIATHLON. The top European triathletes take part in this unique event.

The race is one of the few triathlons in the Czech Republic where the action takes place in heart of the city. As part of our support, we provide the organizers with free transport of materials for the event.

The regional organization of the society for the support of people with mental handicaps in Jičín (OOSPMP Jičín) – APROPO was founded in 1996. C.S.CARGO's management was moved by the plight of parents who pledged to take care of their severely mentally handicapped children instead of entrusting them to institutional care. So much so, they decided to financially support them and in 2003 the company became a regular partner with the association.

In the past, C.S.CARGO acquired a series of companies in the transport and logistics sector. We're proud to continue support of projects these companies started. One of those is the long-term financial support of Diaklubu Nová Paka.

Diaklub is an association of diabetic children in the Hradec Králové region and has been associated with the hospital in Jičín since 2008. The group organizes events throughout the year for children with diabetes with the goal of making their experience similar to those of their peers.

Since 2002, our company has been a regular partner of the Czech Handicapped Table Tennis National Championship through the Jičín athletic club.

Every year, the participants provide a fantastic tournament, which deserves not only our help and support, but also a visit in person.

Medical material for the Czech Army 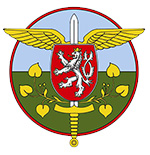 Car first aid kits from the C.S.CARGO fleet that had to be replaced according to the Transport Ministry regulation that took effect on January 1, 2011 went to good use. We presented the materials to representatives of the Czech Army at Lipník nad Bečvou. The first aid kits went to members of the Afghan National Police and Afghan National Army that Czech soldiers cooperate with. Many vehicles of the Afghan army and police lack basic healthcare materials, which can save lives in the complicated security conditions in that country. 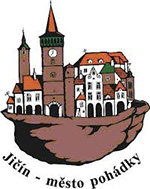 The beginnings of the fairy tale festival dates back to 1990, when the first “Kubínova Jičína” festival took place. A year later, a civic group made up of mostly educators helped establish the now-internationally known festival Jičín – The Town of Fairy Tales.

Our company completely identifies with the goals and aims of this festival, which include the integration of mentally and physically handicapped children, or the environmental education of the general public. We have financially contributed to the festival since 2000.

C.S.CARGO also supports the artistic activities of the brothers Forman as part of its social responsibility policy. In 2010, we gifted the theater a truck capable of transporting a mobile theater tent for the cabaret project Obludárium (Freak Show), which traveled over 33,000 km throughout Europe. The show was created with the help of the Theatre National de Bretagne in France and played 462 times, mostly in Western Europe (France, Spain, Italy, Scandinavia) and Israel.

In April 2011, the Obludárium returned from its travel to play 9 shows in a circus tent on the main square in Jičín, which the city itself took part in organizing.

The Brothers Forman Theatre and its Obludárium took part in the 48th Annual International Film Festival in Karlovy Vary in June 2013 with the support of C.S.CARGO, where it performed four shows.

C.S.CARGO a.s. supported the construction of a new and modern playground in one of the largest housing projects in Jičín. The playground, which can be found in U Trati street, underwent minor alterations in 2012 and continues to serve the children of the area.

Flood aid in the Liberec region

The Liberec region experienced damaging floods in 2010, which affected some of our employees as well. The company's management decided to help these employees by setting up a so-called flood account. They also received full pay while at home removing the flood damage.

Other people needed help as well. We delivered mineral water worth some CZK 40,000 to victims in the town of Raspenava. Employees from the Liberec branch also offered to help themselves. Additionally, we provided free use of vehicles to transport humanitarian aid.

C.S.CARGO employees had the opportunity to contribute small financial amounts to the newly-created accounts, which collected CZK 39,649 that went toward the reconstruction of the nursery school in Donín, Hrádek nad Nisou.

Education and cooperation with schools

We are well aware of the advantages and the need to work with students of transport schools. We get special joy from transferring information to future transport and logistics experts and we're pleased that we can present C.S.CARGO and offer them employment in our team.

We cooperate on an EU operational program with the Jan Perner Transport Faculty. C.S.CARGO is a partner of the Operational Program Education for Competitiveness CZ.1.07/2.2.00/15.0352, Engineering Education as Interaction of Theory and Practice.

C.S.CARGO allows students to work at the company for two years on a defined, mutually agreed-upon upon project, which results in the creation of a dissertation, lectures, and seminars that connect theory and practice in logistics.

C.S.CARGO a.s. is ISO 9001 and ISO 14001 certified. As part of the implemented system, we set process and policies that go beyond those required by the certified norms.

We are aware the effect our business has on the environment, which is why we actively and responsibly set environmental goals and regularly evaluate the functioning of the system that we constantly try to improve.

We also focus on our employees at all levels, who we educate about protecting the environment, saving energy, and the foundations of minimizing the negative effects of our everyday activities. 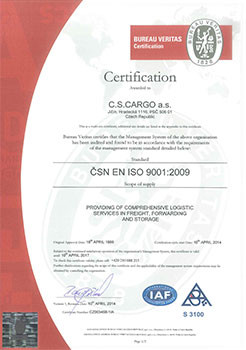